It was the product of an inherited fortune. It employed an architect so obsessed with perfection, he razed whole sections of the building to the ground if they didn't meet with the approval  of his hyper-critical eye. From the time of its construction in 1630 till 1905 when it was purchased by the state, it passed through the hands of no less than seven different families. It was even visited by Louis XIV in April 1651.

The Château de Maisons, which is now called Château de Maisons-Laffitte, is located in Maisons-Laffitte, a northwestern suburb of Paris, in the department of Yvelines, Île-de-France. Construction of the château was commissioned in 1630 by René de Longueil using the funds from a fortune inherited by his wife, Madeleine Boulenc de Crévecœur, who died six years later in 1636, never to see the fruits of her inheritance. By 1651 the château was complete, and it was in this year that it played host to King Louis XIV in April.

The Château de Maisons was designed by François Mansart in the French baroque architectural style. According to a pamphlet entitled, La Mansarade, the architect realised, after completing the construction of the first floor of the château, that he had committed an error in the plans  So in a ludicrously egocentric move, he apparently razed everything built so far to the ground in order to start afresh! A tall tale? Who knows. But it certainly makes for a compelling story.

René de Longueil died in 1677, and the château remained in his family until 1732. Between that date and 1905 it passed through the hands of no less than seven families. Too many to list here. For a full history of the château, click HERE. In 1905, the State purchased the château in order to save it from demolition. Then in 1914 it was deemed an historical monument.

On 9 July, 1979, France issued a set of seven stamps in their ongoing Tourism series. To read the previous six parts, simply click on the relevant link. Part 1. Part 2. Part 3. Part 4. Part 5. Part 6. In this blog I'll take a close look at the final stamp in this series, the 0,45 value. This stamp depicts the Château de Maisons, which is now called Château de Maisons-Laffitte. This stamp was designed and engraved by Pierre Forget. Contrary to the stamp depicting an architectural monument that I studied in Part 6, I think this one is a true stunner. A far  more interesting and visually appealing design than the stamp shown in Part 6. But that's just my humble opinion. 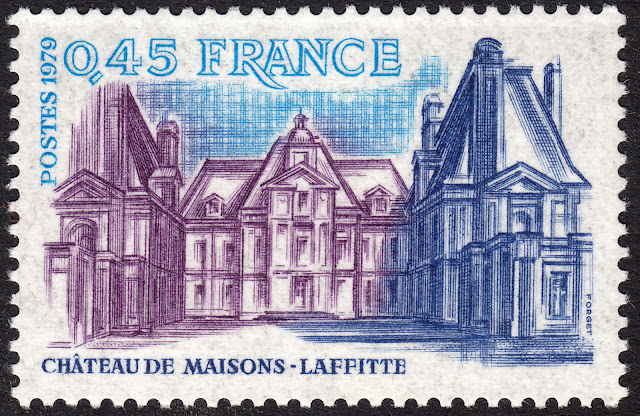 This stamp has, in my eyes, a somewhat Decaris-esque quality. If compared to Decaris' 1946 Luxembourg Palace design, we can see a marked similarity of line style. 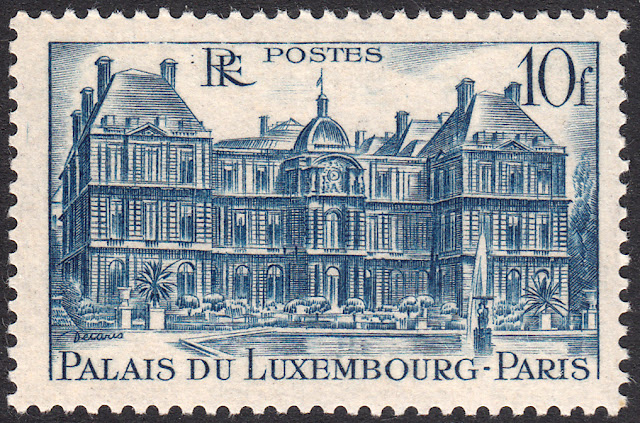 Indeed, even the 1948 Saarland architectural stamp by Decaris bears some similarity, I feel. 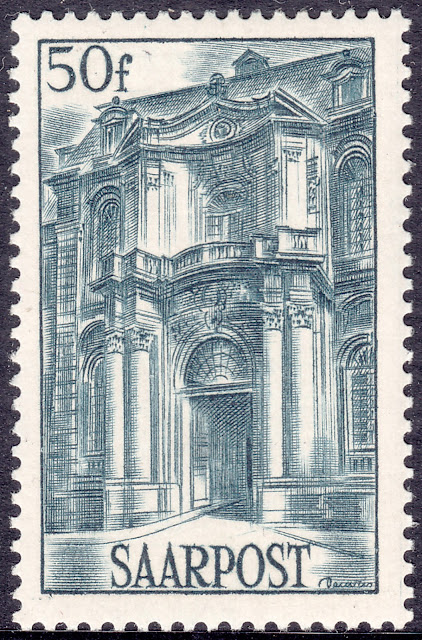 For several centuries it was considered one of the richest, if not the richest, of Abbeys in France. It was the hub of intellectual life in the French Catholic church, housing one of the most important scriptoriums in the country. It was pillaged and burned by Vikings, then like a phoenix rising from the ashes, it  was restored to its former glory only to have portions blow up, towers collapse and other forms of atrocious wonders. This is the Benedictine Abbey of Saint-Germain-des-Prés in Paris.

Founded in the 6th Century by Childebert I, who was the son of Clovis I, the Abbey of Saint-Germain-des-Prés was built on the outskirts of early medieval Paris, in a region of the Left Bank that was quite prone to flooding from the Seine. Consequently, it was established on slightly raised meadow land, known in French as a prés. Hence the name it has been given. By the 9th Century it was already considered one of the richest abbeys in France, as evidenced by its polyptych (an inventory of properties owned by the church). It was also in this century that  it was the victim of several Viking onslaughts, which left parts of the church grounds little more than smoking ruins. By 1014 it had risen from the ashes and was restored to something akin to is former glory, possibly even more glorious.

Over the course of the next two centuries, its riches and stature grew, and by the 11th Century, the church contained what was considered an "important" scriptorium, a polite way of saying a kick butt library! In fact, the abbey was the hub of the Catholic church's intelligentsia right up until the French Revolution when it was disbanded. But this wasn't the end of the destruction inflicted upon the abbey. In 1794 a fire broke out completely destroying its library. And at some point (I'm assuming around this time but haven't been able to find a date yet) an explosion of stored saltpeter totally levelled the abbey and its cloisters. Only the church itself was spared in this particular disaster. To this day the abbey church remains as the Église de Saint-Germain-des-Prés. It is one of the oldest, and perhaps one of the most unlucky, churches in Paris.

On 9 July, 1979, France issued a set of seven stamps in their ongoing Tourism series. To read the previous five parts, simply click on the relevant link. Part 1. Part 2. Part 3. Part 4. Part 5. In this blog I'll take a close look at the 1,40 stamp, which depicts the Abbey of Saint-Germain-des-Prés. This stamp was designed and engraved by Jacques Gauthier. This stamp has been executed in a 2D front elevation style akin to an architectural drawing. Personally, I'm not very partial to this design. For an abbey with such a remarkable history, I would have thought a stamp with a far more dynamic representation of the building was in order. I'm sure there are those out there that love its detailed simplicity. And that's totally fine. But I don't. I consider it rather boring. 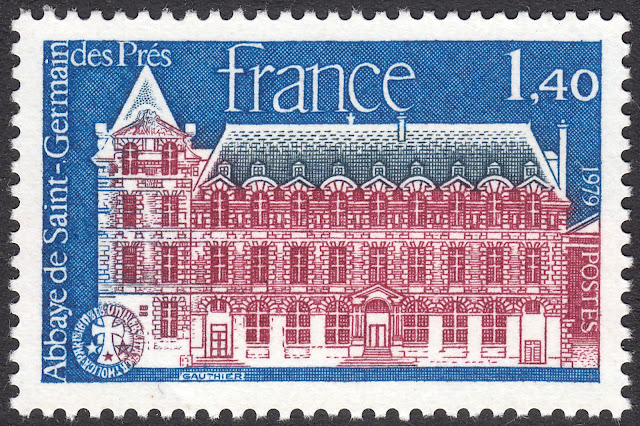 The last battle of the Breton War of Succession was fought here in 1364. In 1776, at the beginning of the US War of Independence, Benjamin Franklin came through here in his way to meet with Louis XVI to seek military aid. In 1795, 750 rebels were shot and buried here. Its train station was of vital strategic importance during WWII. Its inhabitants are called Alréens. This is Auray, a commune in the Morbihan department in Brittany, northwestern France. Aside from its rather checkered history, Auray is home to some breathtaking architecture. From bridges and fountains to churches and stunning timber houses, a stroll through the city is well worth it.

On 9 July, 1979, France issued a set of seven stamps in their ongoing Tourism series. To read the previous four parts, simply click on the relevant link. Part 1. Part 2. Part 3. Part 4 In this blog I'll take a close look at the 1,00 stamp, which depicts a gorgeous wooden house in the town square of Auray. This stamp was designed and engraved by Claude Haley. This particular stamp is quite special in that it won Haley the 1979 Philatelic Art Grand Prize. A very worthy winner. This stamp is crammed with an amazing level of detail. 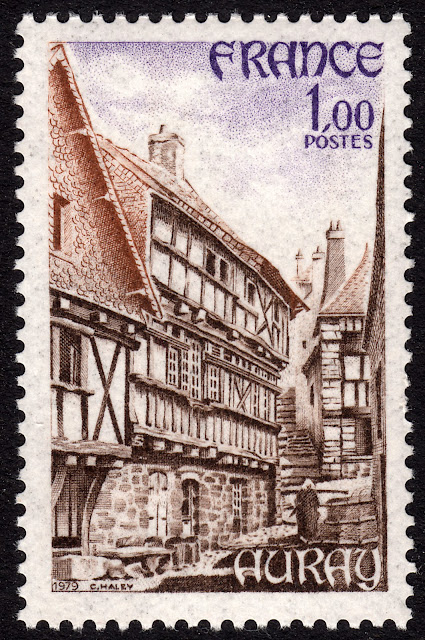 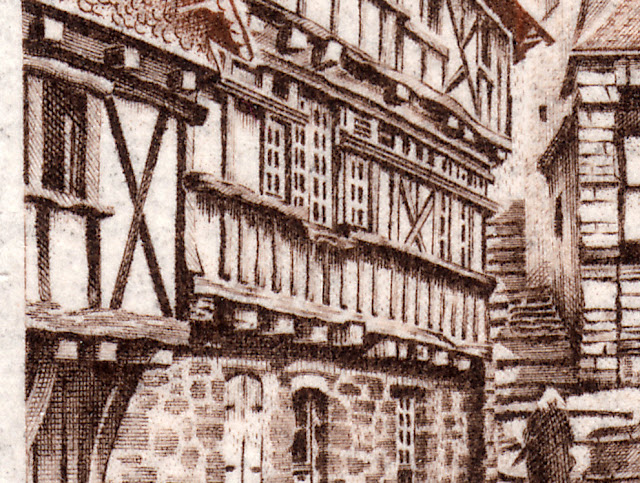 Ever wondered what a stamp would look like as a playing card? This is a question French stamp engraver and designer, Pierre Forget, set out to answer in 1979 to commemorate Norman abbeys. Two abbeys were chosen for this cutting edge stamp design: the Abbey of St-Pierre-sur-Dives and Bernay Abbey. Without further ado, let us delve...

Its stunning towers loom large over the sleepy town of St-Pierre-sur-Dives. The Abbey of St-Pierre-sur-Dives, Abbaye Saint-Pierre sur Dives, was founded in the 11th century by Countess Lesceline, who happened to be the great-aunt of William the Conqueror. It was originally built to house a community of nuns. At some point over the course of the next century, the nuns were replaced by Benedictine monks from the Abbey of the Holy Trinity in Rouen. The abbey as it stands today is very different from its original design. It was rebuilt between the 13th and 15th centuries, during a time known as the Gothic period. Having said this, the church still contains the tomb of its founder, Countess Lesceline.

Bernay Abbey, Abbaye Notre-Dame de Bernay was founded in the 11th century by Judith of Brittany. Judith was the daughter of Conan I of Rennes and wife of Richard II, Duke of Normandy. The original design was ahead of its time, being one of the first examples of Romanesque architecture in Normandy. The church was listed as an historic monument in 1862.

On 9 July, 1979, France issued a set of seven stamps in their ongoing Tourism series. To read the previous three parts, simply click on the relevant link. Part 1. Part 2. Part 3. In this blog I'll take a close look at the 1,00 stamp, which depicts both Abbey of St-Pierre-sur-Dives and Bernay Abbey in a funky playing card style. This stamp was designed and engraved by Pierre Forget. 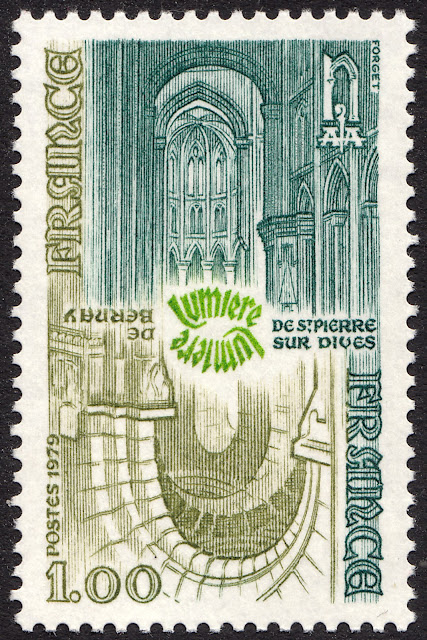 This stamp is truly fantastic. The top half commemorates Abbey St-Pierre-sur-Dives. At the bottom of the stamp, in the inverted style of a playing card graphic, is a representation of Barney Abbey. Aside from the glorious engravings of the church interiors, this stamp has a couple of other interesting features. If you look to the top right, you will come across this... 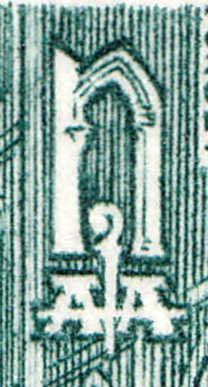 Forget has ingeniously added the letter N for Normandy in theform of a vault in the ceiling. Below this we see the letters AA forming a cross with a Cross of the Abbey,. The AA stands for A year of Abbeys. Pretty cool.