What famous race began as a result of a rivalry between two newspapers? If your answer is the Tour de France, then you are absolutely right! It all started on 20 November 1902 at a crisis meeting at the offices of the  French newspaper L'Auto. The newspaper had been struggling with stagnating sales, and all the while their rival newspaper Le Vélo was dominating the news stands. Naturally the backers of L'Auto were rather unhappy with the situation. Something had to be done...

Enter one  Géo Lefèvre, the 26 year old chief cycling journalist for the paper. He had a radical idea based on the knowledge that cycling races sell lots of papers. That being the case, why not host a cycle race, a race larger than anyone had ever seen? If this audacious idea should work, then perhaps L'Auto may just match its rival in newspaper sales, or even better, put its rival totally out of business! After more excited meetings L'Auto announced the race on 19 January 1903. After much debate, a format for the race was finally agreed upon. The race was to be run over 19 days, commencing on 1 July.

On 1 July some 80 competitors lined up outside the Café Reveil-Matin in the village of Montgeron for the very first Tour de France. The race commenced at 3:16 pm on 1 July 1903. It goes without saying that L'Auto featured the race on its front page that day. After a gruelling race where only 24 of the 80 entrants finished, the title of winner went to Maurice Garin (pictured below). 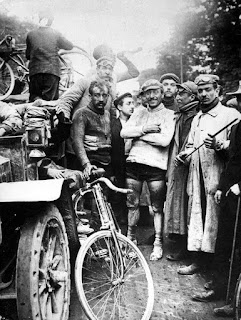 And it should be noted that sales for the newspaper L'Auto doubled due to the race. So it was a cracking success. Not only that, its continued popularity has ensured its longevity. The race still runs annually with competitors from all over he world vying for a place on the winner's podium.

On 25 July 1953 France issued a stamp celebrating the 50th Anniversary of the Tour de France. The stamp was designed and engraved by Albert Decaris. 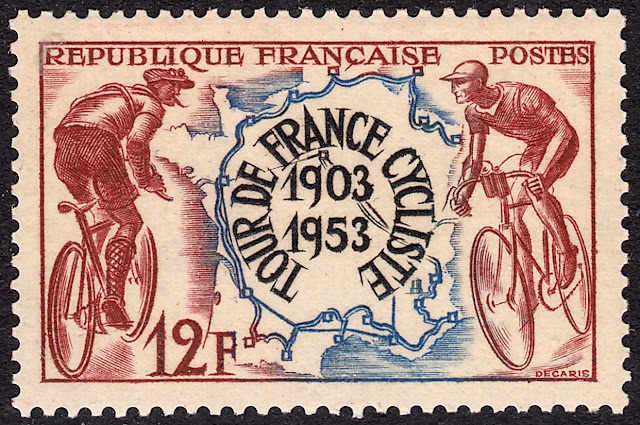 The design of this stamp is fantastic. In the centre of the stamp we see a map of France with the course for the Tour de France plotted out. The space within the roughly circuitous route has been used for the title of the stamp. Flanking the map of France are two cyclists. The cyclist on the left is wearing clothes consistent with the early years of the race. Perhaps this is the winner of the first race, Maurice Garin. The cyclist on the right is a 'modern' rider from the 50's.

In 1951 a committee, initially known as the Provisional Intergovernmental Committee for the Movement of Migrants from Europe (PICMME), was formed to attempt to deal with the chaos of the displacement of millions of people as a result of World War II. Its purpose was to assist European governments identify countries for the potential re-settlement of some 11 million people uprooted from war-torn countries. During the 1950's it managed to re-settle over a million people - an incredible achievement in my view. The committee has undergone several name changes over the years. In 1952 it became the Intergovernmental Committee for European Migration (ICEM). In 1980 to the Intergovernmental Committee for Migration (ICM). Then in 1989 it changed to the International Organization for Migration (IOM). The IOM also deals with the resettlement of people displaced by natural disasters. Click HERE for more on this great organisation.

On  28 April 1967 Monaco issued a stamp to publicise the Intergovernmental Committee for European Migration (ICEM), which on the stamp uses the acronym CIME. This stamp was engraved by Albert Decaris. 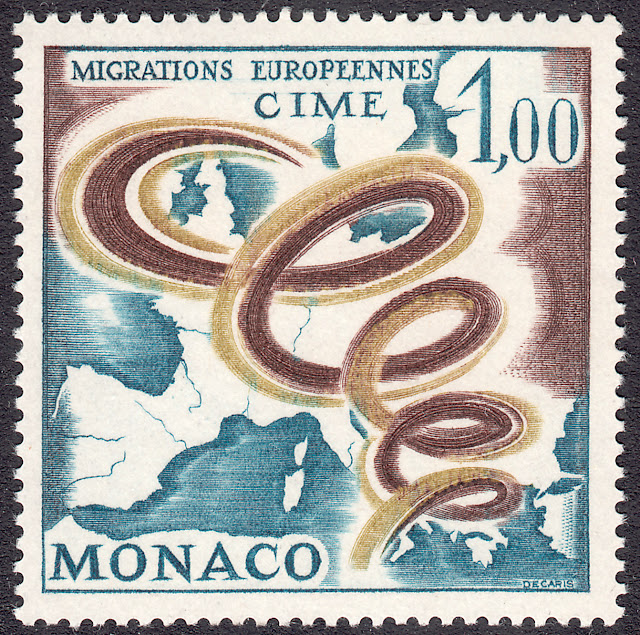 As far as design goes, this stamp is excellent. The graphics are simple, elegant, and speak volumes. The spirals suggest controlled, successful migration - to me at least.

A physician. A scholarly monk. A fantasy writer. A bawdy song and joke composer. These couldn't possibly be the talents of just one man...right? Well, if your answer is yes, then you haven't heard of the colourful French Renaissance humanist, Francois Rabelais. And if the above list wasn't impressive enough, Rabelais was considered such a powerful writer that the word "Rabelaisian" has been coined to describe writing "marked by gross robust humour, extravagance of caricature, or bold naturalism" (Merriam-Webster Dictionary).


It somehow seems fitting that such an interesting character have enigmatic origins. There is some dispute over exactly when Francois Rabelais was born. Some say he was born as early as 1483, but the most likely time of his birth was in November 1494. The place of his birth is also uncertain, but he was probably born near Chinon in the Touraine where his father, a lawyer, worked.

Rabelais' education began when he entered the Franciscan Order of monks. There he studied Greek and Latin as well as science, philology, and law. He eventually left monastic life to study medicine at the University of Poitiers and at the University of Montpellier. In 1532 he moved to Lyon to practice medicine. Here, he also edited Latin texts. In his spare time he wrote and published humorous pamphlets. Using the pseudonym Alcofribas Nasier - an anagram of his name - he wrote Pantagruel. This book was to become the first of his Gargantua series, for which he became famous.

I'll end this brief description of the life of Francois Rabelais with the now famous words that he penned in his will: "I have nothing, I owe a great deal, and the rest I leave to the poor". He died in April 1553.

On 26 June 1950, France issued a stamp in honour of the remarkable Francois Rabelais. The stamp was designed and engraved by Albert Decaris. 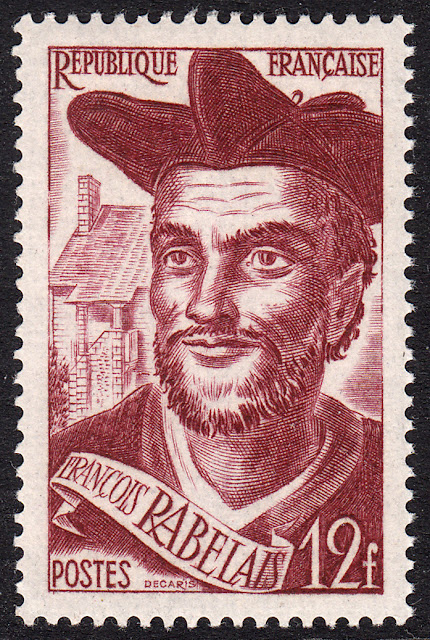 Decaris has done a fantastic job capturing the humorous nature of Rabelais. Just look at that cheeky grin and the penetrating gaze. We just know he is formulating some witty yarn to dazzle his readers.

Between 1936 and 1944 Ivory Coast issued a large set of 41 definitives comprising 4 different designs. One of the designs, used for 15 of the stamps, was engraved by Albert Decaris. It's possible he also designed the image, but I'm not sure yet. This was the third design Decaris engraved and one can see the burgeoning of a great artistic talent.

The image Decaris designed depicts a coastal scene. This design was issued over five printings between 1936 and 1944. And 8 different colours were used. I recently purchased a set of the Decaris design, but I discovered the set is missing 3 values unfortunately. I guess I'll have to keep hunting for the 3 missing values. Nevertheless. the 12 stamps I received are absolutely fantastic. They are so nice, I decided to show them all here.

My first ever true love was television. I grew up spending every moment of my spare time watching my favourite TV shows and movies. TV is just as important to me now, just perhaps not my true love any more (that position is now otherwise taken)! I hadn't been collecting Albert Decaris engraved stamps for long before I came across a couple of TV related stamps he engraved; one for France and one for Monaco (I believe that is all). In this blog I shall study the stamp issued in Monaco.

The 1964 Monte-Carlo International Television Festival stamp was issued in Monaco on 3 December 1964 to celebrate the fifth festival to be held in 1965. This lovely stamp is bordered by a curtain, which gives the overall composition a cinematic feel. The eye is then drawn to the bottom left of the stamp where Decaris has quite ingeniously placed a television with the stamp's title on the screen. Behind the TV is one of Monaco's primary tourist attractions: The Rock of Monaco. 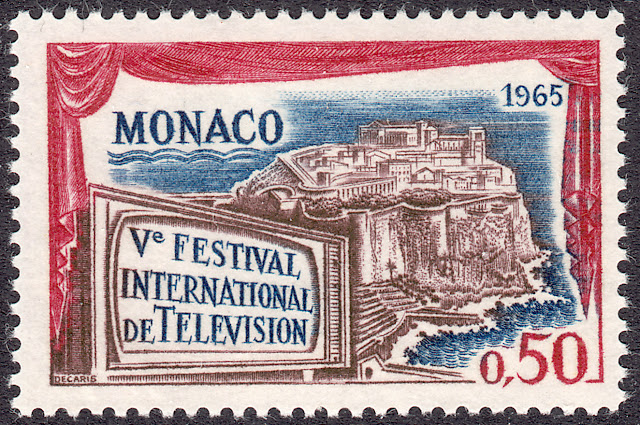 The Monte-Carlo Television Festival was founded in 1961 and based in Monaco. It was created by Prince Rainier III of Monaco as a festival and a competition for television productions. Rainier III saw this new technology as a way to bring cultures closer together and enhance their knowledge of each other.

At the end of the festival the prestigious Golden Nymph awards are held (a bit like the Oscars). Winners of the various categories receive a Golden Nymph statuette, which are copies of the Salmacis Nymph created by the sculptor François Joseph Bosio, the original of which is on display at the Louvre Museum in Paris. 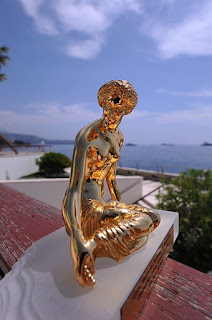