Imagine you are travelling along the River Seine in a north-westerly direction from Paris. You enter the Eure département of historical Normandy. Then something catches your eye. A large circular castle standing on a huge mound. It looms some 90 metres over the commune of Les Andelys on the River Seine. You are seeing the stalwart medieval castle known as Château Gaillard.

Construction on the castle began in 1196. It was built for the King of England, Richard the Lionheart. At this time King Richard was also the Duke of Normandy. It was a massive castle with a considerably advanced design, employing the principles of 'concentric fortification'. Its complexity notwithstanding the castle was completed in the record time of just two years. It was built at the same time as the town of Petit Andely, which it overlooked. Today, the castle is in ruins, but it is still an awe-inspiring sight. 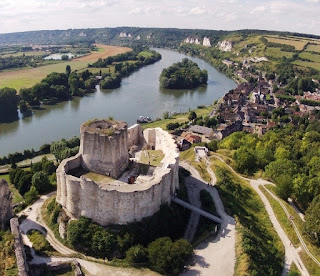 On 8 June 1954 France issued a set of seven stamps featuring French Monuments. The 8f value features Château Gaillard and Les Andelys on the River Seine. According to Phil-Ouest, Albert Decaris only designed this stamp. But I cannot find another name on the stamp, which usually, from what I've seen, means that it was both designed and engraved by the one person. So I'll assume Decaris engraved this stamp also. If anyone knows differently, I'd love to hear from you. 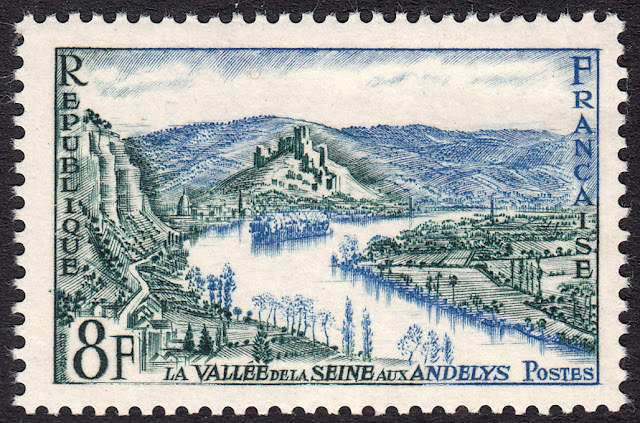 In this design, the River Seine sweeps through the centre of the stamp, drawing the eye towards the middle distance where the ruin of the medieval castle, Château Gaillard, stands proudly. Below the castle to the left is the commune of Les Andelys.

The famous French general, Louis de Bourbon, the Prince of Condé, was born on 8 September 1621. His father, Henri de Bourbon, first cousin once removed to King Henry IV, demanded his son have a proper education. Louis spent six years at the Jesuits' school at Bourges, where he studied history, law, and mathematics. After completing his studies at Bourges, he went on to study at the Royal Academy in Paris.

At the young age of 17 Louis began to display talent for leadership. While his father was absent from home, Louis managed to govern Burgundy successfully. It was about this time that young Louis' personal life became somewhat complicated. His father had betrothed him to the 13 year old, Claire-Clémence de Maillé-Brézé, niece of the powerful Cardinal Richelieu, chief minister of the king. The problem was Louis was in love with someone else, a woman named Marthe Poussard (mademoiselle du Vigean), daughter of the king's gentleman of the bedchamber. Despite this, Louis' father forced him to marry the thirteen year old girl.

Even though his young wife bore him three children, he accused her of multiple infidelities and had her locked away at Châteauroux. These charges were in all likelihood false, and merely a way of ridding himself of a woman he didn't love.

By the time of the Thirty Years War in 1643, Louis was already a combat veteran. But at the Battle of Rocroi on the 19 May, he excelled himself against Spanish generals with far greater experience. After a resounding victory, he returned to Paris a hero. But the woes of that annoying  marriage continued. It seemed the only respite from this situation was returning to the battlefront. In 1644, he went to Germany and he was again victorious in the Battle of Frieburg.

Louis' continued military success earned him respect as a general and he was renowned as le Grand Condé, which basically meant he was considered the most successful of the Condé family. For more on Louis, click HERE

On 31 July 1944 France issued a set of six semi-postal stamps commemorating 17th Century French celebrities. Each stamp has a surcharge that contributed to national aid. One of these stamps features Louis as The Grand Condé. The stamp was designed and engraved by Albert Decaris. 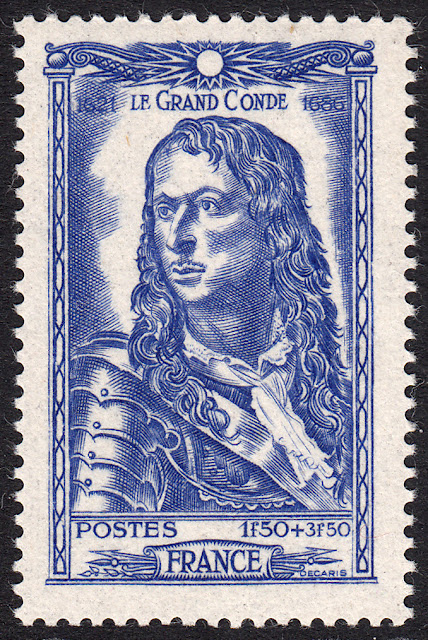 There are a few features in this design that I really like. Decaris has rendered the armour on Louis' right (our left) arm beautifully. I also like the delicate feel Decaris has given to the neck scarf. One final feature I like is the quiver-like country nameplate. A nice suggestion of the subject's military prowess.

On this day, 6 May, in 1901, the supremely talented Albert Decaris was born in Sotteville-lès-Rouen, France. This year marks the 115th anniversary of his birthday.

Over the last couple of days I've spent some time perusing my collection of stamps he engraved, searching for something appropriate to use to celebrate his birthday. When I turned to my stamps he engraved for Monaco, I came across a set that reminded me of one of my most memorable birthdays when I was a kid. I think it was my tenth or eleventh birthday and I recall being told we were going to visit my grandmother. I always enjoyed seeing my grandmother so I was quite excited by the idea, but little did I know we were going somewhere far more exciting! So I jumped into our car and we started driving. It wasn't long before I knew weren't going to my grandmother's. About a half an hour later my eyes nearly popped out of my head as we pulled up right near a Circus Big Top. That birthday was the best. What better way then to celebrate Decaris' birthday but with some circus stamps.

The Premier Festival International du Cirque or International Circus Festival of Monte-Carlo is an annual festival, created in 1974 by Prince Rainier III of Monaco. Every January the best circus performers from all over the globe flock to Monte-Carlo to take part in the festival.

On 12 November 1974, Monaco issued a sumptuous set of seven stamps to celebrate the first year of the International Circus Festival of Monte-Carlo. Albert Decaris engraved the stamps and in my humble opinion they are some of the finest stamps he ever produced. The fun and frisky nature of the stamps suit his quirky style to a tee.

Roll up! Roll up! The circus has come to town!

Can you hear the crack of the whip? The roar of the wild beasts? We know what that means. Enter the brave tamer, decked out in his leopard-skin loin-cloth, working hard to maintain control of a group of tigers. Is that a tiger sneaking up behind him ready to pounce? Or is it a bested tiger and an example of what the tamer hopes to achieve with the other three tigers staring him down? 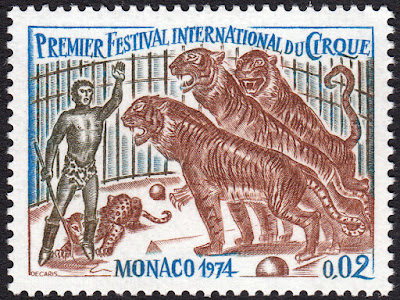 The thunk of horse hooves reverberates beneath the Big Top as the prancing horses gallop out and dazzle the crowd with their organised prowess. Such colour. Such beauty. 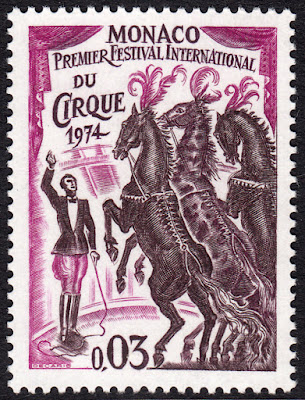 Who doesn't love an acrobatic elephant? Watch these giant lumbering beasts perform staggering feats of balance and control. Take a photo. What a great snapshot! 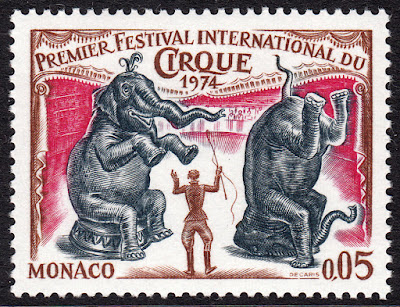 Prepare to be spellbound by the equestrian event. Marvel at the feats of human agility, all while riding upon a horse. 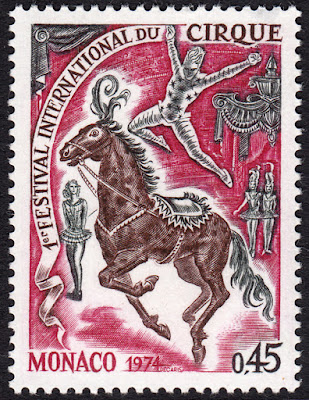 And here come the clowns! Laugh yourself silly with their zany, side-splitting antics. 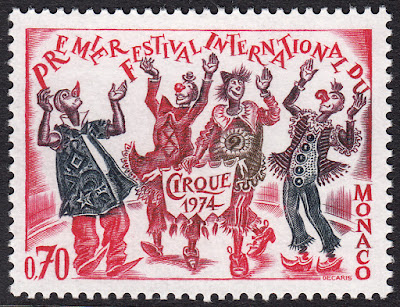 And what do we have here? Is that a man standing on a bike with a woman doing a handstand on his head? What masterful balance! Quiet now. We wouldn't want to disturb their concentration. 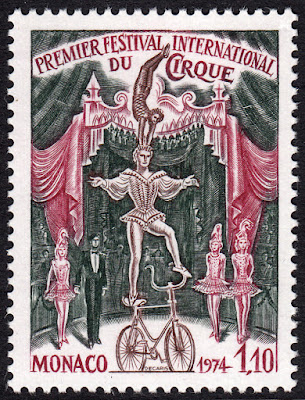 Quick. Look up! Watch the grace and poise of the High-Wire acrobats. Just look at them fly. Tumbling, flying, catching, swinging... 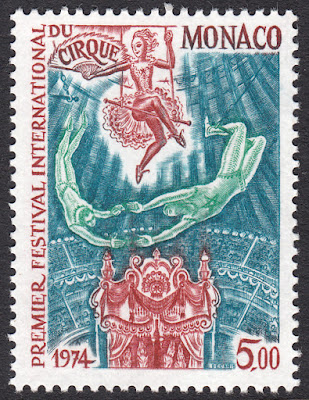 Well, I hope you enjoyed the show!

In 1939 Cameroun issued a beautiful set of Postage Due stamps, featuring examples of carved African statues. The set comprises 10 stamps featuring the same design. A further Postage Due with the same design, but slightly tweaked was issued in 1944 (but more on that later). This design was engraved by Albert Decaris. Each value of this set was issued in a different colour, which in my opinion, subtly changes the impact of the design. As such I will share all the different values here. All colours I have used are according to the Scott Catalogue. 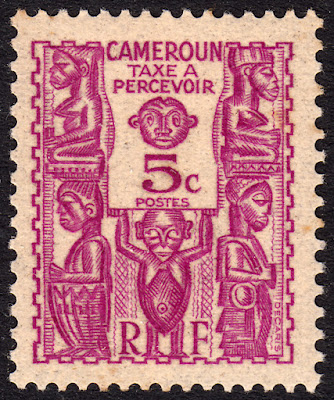 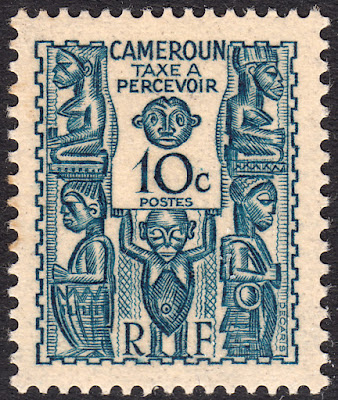 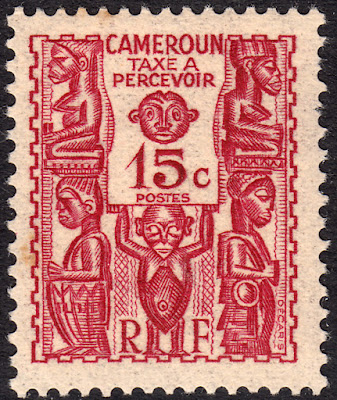 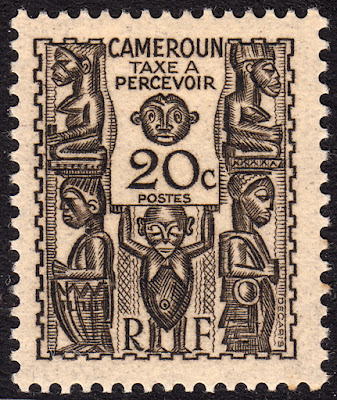 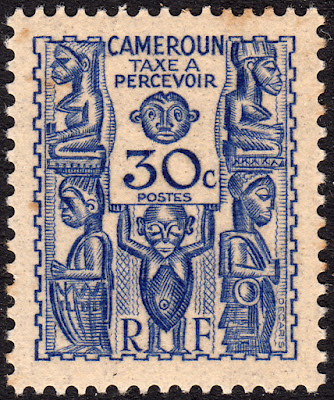 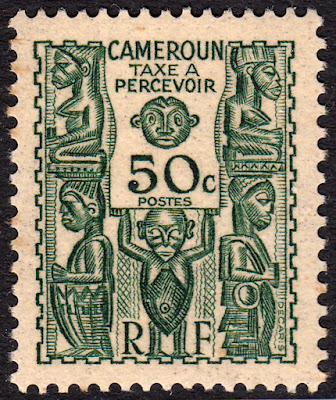 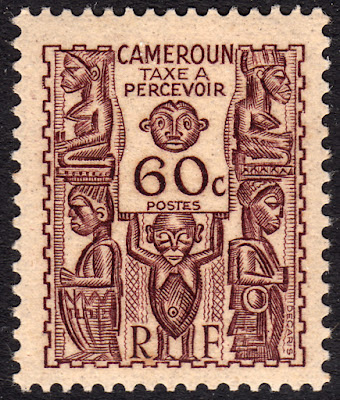 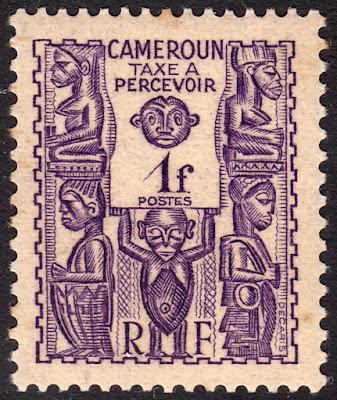 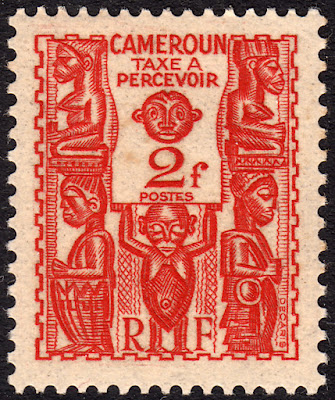 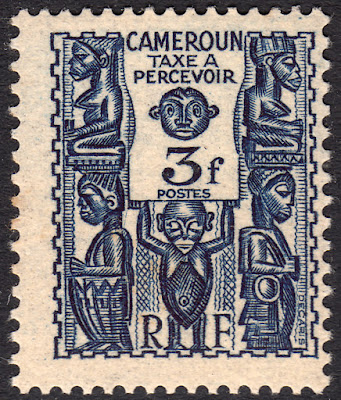 As I mentioned above, there was a further Postage Due stamp of the same design issued in 1944. But this stamp is slightly different. Can you pick it? 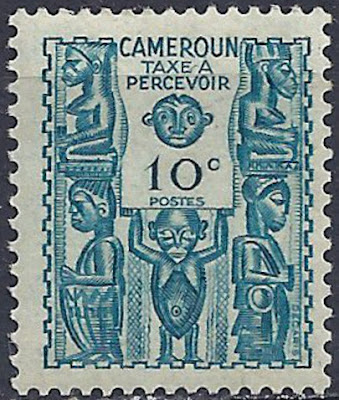 If you haven't spotted it yet, turn your attention to the bottom of the stamp. The R & F are missing. Incidentally, this later stamp was not issued in Cameroun, according to the Scott Catalogue.

So which colour do you prefer?