What do truck headlights and astounding feats of aviation have in common? Louis Blériot, aviator, inventor, and engineer.

Louis Blériot, born 1 July 1872 in Cambrai, France, was drawn to engineering and design from at young age. Indeed, while attending the Institut Notre Dame in Cambrai, he won many class prizes for his engineering drawings. He then attended the prestigious École Centrale in Paris, after having spent a year gaining special tuition in order to pass the rigorous entrance exam. He graduated École Centrale around the middle of his class, which considering the high level of competition was a pretty decent result.

His first job was at an electrical engineering company in Paris, called Baguès. It was during this time that he came up with an invention, which would eventually bankroll his other passion, aviation. He designed and created the first ever practical headlamp (headlight) for automobiles. His new headlamp used a compact integral acetylene generator. In 1897, he decided to leave the company he had been working for and opened his own showroom in Paris, selling his headlamps. Turns out, this was an excellent business decision, for he quickly gained contracts with two of the foremost automobile manufacturers of the time, Renault and Panhard-Levassor.

Ever since his school days, Blériot had had an interest in aviation, but it wasn't until his visit to the 1900 Exposition Uniiverselle that he thought seriously about aircraft experimentation. It was seeing Clément Ader's Avion III, an experimental steam-powered aircraft, that seemed to really get his creative juices flowing. I can understand why. This 'plane' must have, at the time, seemed quite extraordinary. Check the Avion III out HERE

As I mentioned earlier, Blériot's headlamp business was going great guns so he could afford to splash about a bit of cash with some aviation experiments of his own. His initial experiments were with ornithopters, which are craft propelled by flapping wings, in the fashion of a bird. Many of these were powered by men with the wings strapped to their arms. Then they set about flapping like crazy in an attempt to achieve flight. Ornithopters have always been a bit hit and miss, and Blériot's attempts fell into the 'miss' column.

Then in 1905, he met a fellow aviation enthusiast, a man who would also later become his business partner, Gabriel Voisin. At the time Voisin was working for a fellow named, Ernest Archdeacon, on experimental gliders. Blériot, also an avid photographer, filmed Voisin the during the trials of a floatplane glider Voisin had built. Witnessing this event sparked Blériot into commissioning Voisin to build a similar plane for him. This plane, another glider, was called the Blériot II. Although this plane crashed and Voisin, who was flying it, nearly drowned, the two men were not deterred. Indeed, they soon established their own company, Ateliers d' Aviation Edouard Surcouf, Blériot et Voisin.

The partnership lasted until the end of 1906. During which time the pair built the Blériot III and IV, two powered aircraft that both proved unsuccessful. Their lack of success coupled with the success of rival aviator of Alberto Santos Dumont, who flew his 14-bis a distance of 220 m (720 ft), winning the Aéro Club de France prize for the first flight of over 100 metres, saw the dissolution of the pafrtnership.

After the partnership with Voisin, Louis Blériot established his own business, Recherches Aéronautiques Louis Blériot, This business was primarily funded by Blériot, who employed his own engineers and designers. Over the next couple of years Blériot developed a whole series of aircraft, bearing his name, each one slightly better than the rest. This aircraft research culminated in the construction of the Blériot XI.

At 4:41 am on the 25 July 1909 Blériot made history in his Type XI by setting off from Calais, France in an attempt to cross the English Channel. "Flying at approximately 45 mph (72 km/h) and an altitude of about 250 ft (76 m), he set off across the Channel. Not having a compass, Blériot took his course from the Escopette, which was heading for Dover, but he soon overtook the ship." (Wikipedia)

During the crossing, visibility rapidly deteriorated. In fact, Blériot later said, “for more than 10 minutes I was alone, isolated, lost in the midst of the immense sea, and I did not see anything on the horizon or a single ship”.

Thankfully, a short time later, Blériot spotted the English coast. Unfortunately for Blériot, he had not previously visited Dover to find a good spot to land, so he had to wing it. After spotting Charles Fontaine, the correspondent from Le Matin waving a large Tricolour as a signal, Blériot "circled twice to lose height, and cut his engine at an altitude of about 20 m (66 ft), making a heavy 'pancake' landing due to the gusty wind conditions; the undercarriage was damaged and one blade of the propeller was shattered, but Blériot was unhurt. The flight had taken 36 minutes and 30 seconds." (Wikipedia) Thus history was made!

On 21 November 1934, France issued a stamp celebrating the 25th anniversary of Louis Blériot's English Channel crossing. The stamp was designed and engraved by Achille Ouvré. It is a stunning design featuring a map of the English Channel overlaid by Blériot's Type XI aircraft. 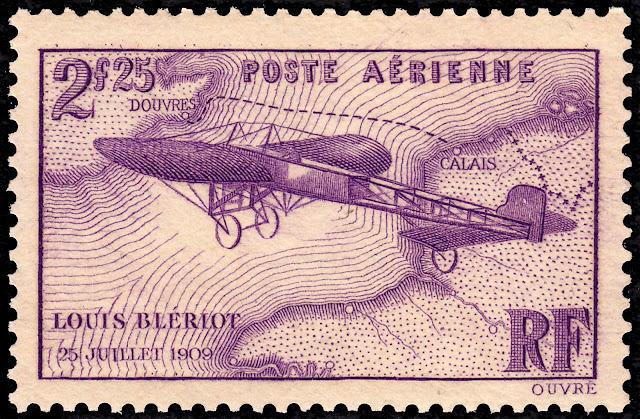