"In consequence of inventing machines, men will be devoured by them."

It all begins with a rather bizarre mystery. An aging clockmaker, named Master Zacharius, is shocked to discover that many of the beautiful clocks he has laboured to create over the years have inexplicably stopped working. He examines each and every clock and can find nothing wrong with them. They should all be working perfectly. But he simply cannot make them run! Why? To discover the answer we need to step into the world of Jules Verne's short story, Master Zacharius or the Clockmaker Who Lost His Soul (Maître Zacharius ou l'horloger qui avait perdu son âme). This story was first published in 1854.

Returning to Master Zacharius and his conundrum, we find him in a deteriorating state of mental health as he struggles to come to terms with the steady stream of broken clocks being returned to him. His daughter Gerande, his apprentice Aubert Thun, and his elderly servant Scholastique, who all live with him, grow increasingly concerned for the old clockmaker's health. Whilst nursing Zacharius, Gerande and Aubert Thun fall in love, an attraction that becomes important as the story progresses.

Then one day the mystery takes a weird twist when a bizarre creature suddenly walks into the village, a creature that is a grotesque amalgam of man and clock. The creature tells Zacharius quite bluntly that he is not long for this world. Zacharius scoffs at this, and replies:


"I, Master Zacharius, cannot die, for, as I have regulated time, time would end with me! … No, I can no more die than the Creator of this universe, that submitted to His laws! I have become His equal, and I have partaken of His power! If God has created eternity, Master Zacharius has created time!"

But things don't get better. Quite the contrary. More clocks are returned and Zacharius' health plummets to dangerous levels. As abruptly as the creature had disappeared, Zacharius disappears from home. After a bit of detective work, his daughter, Gerande, discovers that he has travelled to a castle in Andernatt. The castle houses a grand iron clock made by Zacharius. It is the only clock of his still working. He has journeyed there to see if the clock can provide him any insight into the conundrum. Gerande indeed finds her father at the castle, running about frantically in search of the clock.

Then the old clockmaker finds it. It is a true masterpiece. It has been designed to resemble an old church, and as each new hour strikes, the clock presents a new Christian maxim for its viewers to ponder. But to his horror, the clock is not all that Zacharius finds. The creature is back! Fearing he'll never be rid of this hellish abomination, Zacharius agrees to let the creature have his daughter. Not surprisingly, the daughter is somewhat less than enthusiastic about the arrangement.

Having entered into this dubious arrangement Zacharius believes he has thwarted the creature and in doing so has granted himself immortality. But something strange happens to the clock, seeming to confirm Zacharius' choice. The Christian maxims have been replaced by statements of scientific hubris, such as: "Man ought to become the equal of God," ""Man should be the slave of Science, and sacrifice to it relatives and family."

Then, at the stroke of midnight, just when the wedding ceremony is about to take place, all hell breaks loose. First, a new, death knell, maxim appears on the clock: "Who ever shall attempt to make himself the equal of God, shall be for ever damned!" Suddenly the massive clock bursts, spraying bits and pieces of machinery across the room. Zacharius frantically tries to gather the pieces, believing that the clock, as a whole, represents his soul. But the creature seizes what is left of the clock and disappears again. Seeing this, Zacharius drops dead on the spot. The one good thing that comes of this story is Gerande and Aubert get married and spend their life together. And the diabolical creature is never seen again.

This is the third part in a series focusing on the 150th Anniversary of the Birth of Jules Verne stamp set, issued by Monaco on 2 May 1978. To check out the earlier parts, click on the individual parts. Part 1, Part 2. This beautiful set of eight stamps was designed and engraved by Pierre Forget. One of the stamps in this set features an artistic interpretation of the short story, Master Zacarius. It illustrates Zacharius holding a rather demonic-looking clock. In the background we see the castle where the final scenes take place. And off to the right stand the frightened couple, Gernade and Aubert. This is quite a magical representation of the story with bright colours and vibrant, energetic lines. 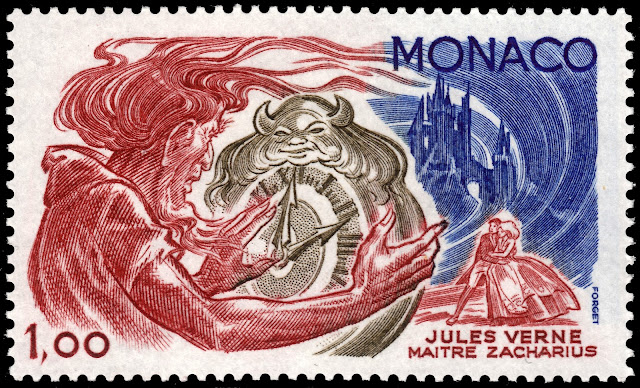