One of the things that drew me to the hobby of stamp collecting was studying stamps from different countries, learning about those countries, and discovering the meaning behind the artwork on each stamp. Each stamp was like a little mystery for me to solve. All the clues are there. One just has to know how to look.

When I first looked at the Decaris designed and engraved stamp entitled Clemenceau issued by France on 18 April 1939, I considered it to be a fairly straight forward commemorative issue. No mysteries. No intriguing errors. Right? Well, actually...no! There's lots of good stuff packed into this little rectangle of paper. But I'm racing too far ahead.

First, why don't we dig into a little history. The battleship Clemenceau was named after Georges Clemenceau, a French statesman who was twice Prime Minister of France: the first time from 1906 to 1909, and again from 1917 to 1920, a period which included the end of the First World War. He was one of the architects of the Treaty of Versailles, which earned him the nickname Pere la Victiore (Father Victory). Clemeneau's bust is also depicted on the stamp.

Now to the fun stuff!

Before we go any further let's take a moment to peruse the stamp in question. It is a rather fine engraving in its own right. And the likeness of Georges Clemenceau is excellent. 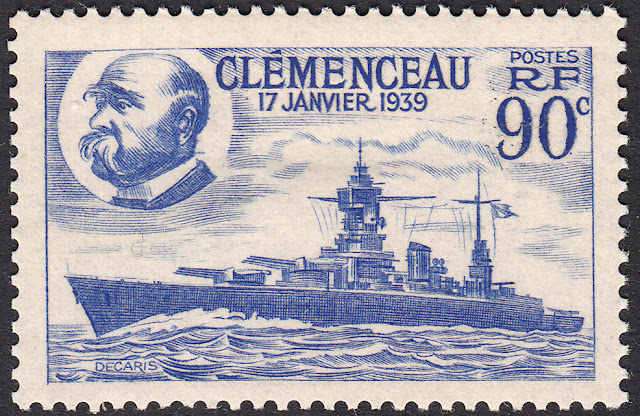 First up I'd like to draw your attention to the fact that Decaris has drawn the battleship ploughing through the ocean. Here we encounter our first problem. The Clemenceau never made it anywhere near the ocean. In fact, the ship was never even finished!

The keel of the battleship was laid down in the Salou graving dock at Brest shipyard on 17 January 1939. Work on her moved very slowly. So slowly that by 1941 she was only 10% complete. She was taken, partially complete, by the Germans as war booty, floated, and used as a ship blocker in the harbour of Brest. On 27 August 1944 she was sunk during a U.S. air raid, which was the beginning of an offensive to liberate Brest.

Believe it or not the intrigue in the stamp does not end there. There is another rather cool secret locked in the design. What f I were to tell you that the ship depicted on the stamp wasn't even the right class of battleship! The Clemenceau was a Richelieu class battleship. But there is strong evidence to suggest that the ship depicted by Decaris is actually  the Dunkerque, the lead ship in the Dunkerque class of battleships.

Here's the evidence. I'd like to give credit to the website, www.phil-ouest.com for the following image.Click HERE to check out the site. 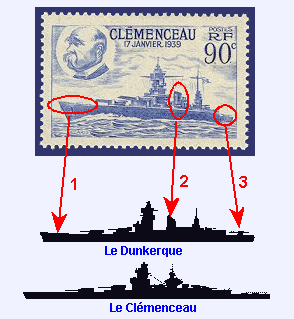 As you can see there are three areas of detail which suggest the ship on the stamp is actually of the Dunkerque class of battleships.


So what do you think? Has the wrong type of ship been inadvertently engraved onto the stamp?