In 1944, Albert Decaris designed and engraved a stamp for France, the topic of which, from what I've read and tried to deduce, seems rather controversial.

The topic of the stamp is the Labour Charter under the Marshal of France, Philippe Petain. This charter changed France from its republican values which was represented by the slogan "Liberty, Equality, Fraternity" to a very different nationalist slogan "Work, Family, Fatherland". Petain was given the Marshal of France title due to his leadership during World War I. But his authoritarian regime whilst Marshal, which included the Labour Charter, was not terribly successful from what I can gather. By the end of World War II Petain was tried and convicted of treason, which is very complicated and not really suitable for this blog. For more info check out these sites: HERE and HERE

Let's take a look at the stamp. It has a face value of 4f with a 6f surcharge. The stamp, although rather austere in nature, is loaded with great detail. The cogs of industry grinding away in the background, made alive by smoke billowing from the stacks. The workers in the foreground personifying the Work aspect of the nationalist slogan. And in the top right corner we have a fine rendering of the man himself, Philippe Petain. 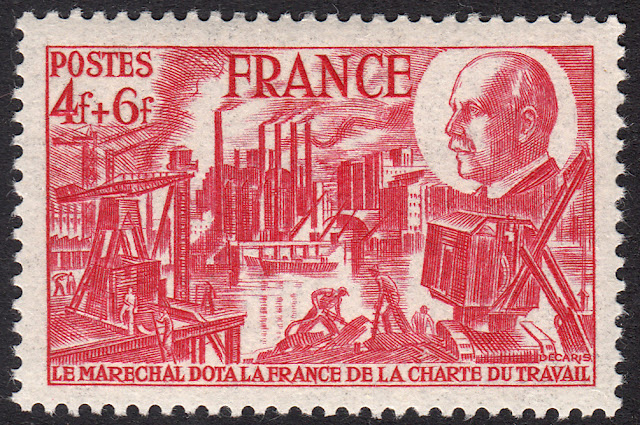