"It is certain that the inanimate objects by which you are surrounded have a direct action on the brain."

The inanimate objects currently surrounding me just happen to be stamps, stamps celebrating the sesquicentennial of the French sci-fi novelist, Jules Verne (for more on M. Verne click HERE). And I have to say these wonderful engraved stamps are definitely having a direct action on my brain - a very positive one. This set was issued on 2 May 1978 in Monaco, 150 years after the birth of Jules Verne on 8 February 1828 in Nantes, France. This set is quite a large one, consisting 8 stamps, all of which were designed and engraved by Pierre Forget. For the sake of brevity, I will study the first three stamps in the set in this blog. These three stamps focus on the novel, L'Île mystérieuse (The Mysterious Island).

The Mysterious Island is a novel set during the Siege of Richmond at the end of the American Civil War in 1865. Five Union soldiers, who are being held as prisoners of war, decide to escape their confinement by hijacking a balloon. Stealthy! Unfortunately for the escapees, the weather is in rather a bad mood. After travelling for some distance over the Pacific Ocean, a storm grabs the balloon and tosses it to ground on a strange uncharted island in the South Pacific. This balloon crash is the subject of the first stamp. 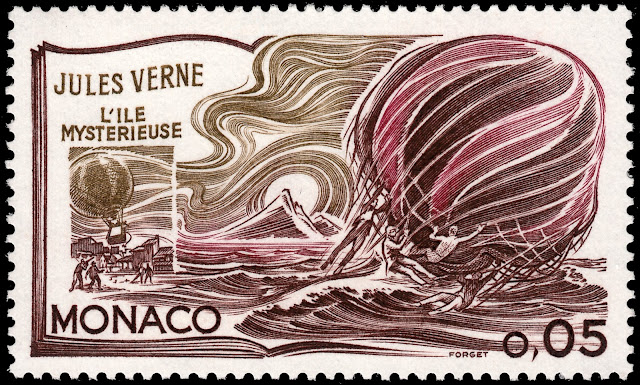 Lucky to be alive, the survivors call their savior 'Lincoln Island' in honour of President Lincoln. Thankfully for the castaways, one of their number happens to be a brilliant engineer (shades of the Professor in Gilligan's Island here!). The engineer, called Smith, managed to produce fire, pottery, bricks, nitroglycerin, iron, a simple electric telegraph. And if that wasn't enough, he designed for them a home on one of the island's cliffs. They called it 'Granite House'. Taking this ridiculous fantasy world even further, they built a seaworthy ship!

As the castaways settle into life on the island - which is starting to sound pretty luxurious to me - a series of strange mysteries begin to unfold. It seems the men have an anonymous benefactor who helps them along with gifts such as weapons and ammunition. And their dog 'Top' is rscued in the water from a dugong by an unseen hand. Just who or what is this deus ex machina (god from the machine)?

Then one day they find a message in a bottle directing them to rescue a castaway on nearby Tabor Island. The group rescue the man, who turns out to be Tom Ayrton, a character from another Verne story In Search of the Castaways. This man was once a crew member on a pirate ship! On their way home they are struggling to find their island in a sudden storm when the mysterious benefactor strikes again. A signal fire has been lit to guide them home.

Things then go rather crazy when the pirate ship also finds the island. After the pirates unsuccessfully attempt to take Granite House their ship suddenly blows up! This brings us to the next stamp. Note the strange silhouette in the water beneath the ship. This is a clue as to the identity of the benefactor. 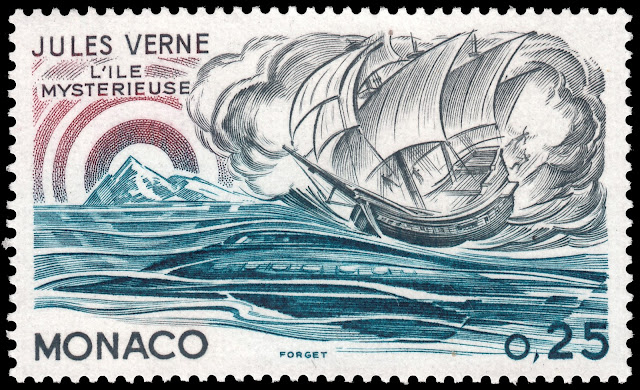 Rather annoyed with the destruction of their ship, the surviving pirates kidnap Tom Ayrton. Our castaways try to get Aryton back, but one of them,. Harber, is shot, seriously wounding him. He survives, but he's so weak that he contracts malaria. Enter the benefactor again. He leaves a box of quinine sulphate, which saves Haber.

After Harbert recovers, they set out again to rescue Ayrton and destroy the pirates once and for all. When they discover Ayrton he is alive and well, and the pirates are all dead, without any visible wounds. Suddenly, a figure emerges in a strange helmet... 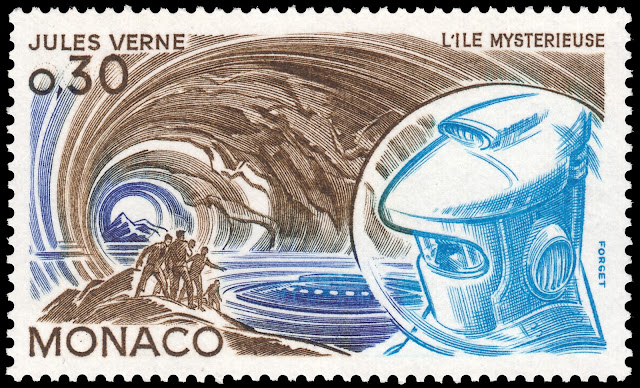 The figure is the mysteriois benefactor in the flesh. He removes his helmet, revealing himself to be none other than... Captain Nemo! After his adventures in 20,000 Leagues Under the Sea, Nemo has sailed his Nautilus (the strange silhouette under the water in the last two stamps) to the island to live in isolation (an idea that didn't work out all that well).