"A man of merit owes himself to the homage of the rest of mankind who recognize his worth."
—Jules Verne

Strange lights spotted in the night sky the world over. Haunting trumpet sounds that accompany these sightings. Add to this the mysterious appearance of black flags worked with golden suns atop many of the world's most famous monuments, including The Great Pyramid, The Effiel Tower, and The Statue of Liberty. What could all this weirdness be? Aliens with a twisted sense of humour? Not this time. This quirky behaviour is the work of none other than Robur, a brilliant inventor and the main character in Jules Verne's 1886 novel, Robur the Conqueror.

This blog is the second part in a series focusing on the 150th Anniversary of the Birth of Jules Verne stamp set, issued by Monaco on 2 May 1978. To check out Part 1, click HERE. This beautiful set of eight stamps was designed and engraved by Pierre Forget. One of the stamps in this set features a key scene from the novel Robur the Conqueror.

The story-line of this novel is rather intriguing considering its year of publication. The central theme of the novel is the argument over the feasibility of heavier-than-air versus lighter-than-air flying craft. But before we go any further with the description of the novel, let's have a look at a bit of history. Since the invention of the hot air balloon in 1783 by Joseph and Etienne Montgolfier in France, inventors had been wracking their brains trying to find a way to successfully propel and steer these craft contrary to wind conditions. In other words, wrest the steering wheel from Mother Nature. For nearly 100 years this seemed an impossible task (Mother Nature had a tight grip on the wheel!). Then in 1886 Gottlieb Daimler created a light-weight gasoline engine suitable for lighter than-air-craft. This engine led Count Zeppelin of Germany to develop a solid-frame craft covered in fabric, powered by two 16 hp Daimler engines. This craft was 416 feet long. This craft, known as the LZ 1, flew successfully for a full 18 minutes in July 1900. It was the first ever airship or "blimp" as we now call such a craft.

So it was in this early environment of inventors pulling their hair out, searching for controllable lighter-than-air flying craft that Jules Verne's novel is set. In the story, the main character, Robur, is trying to convince the movers and shakers of the Weldon Institute, a flight enthusiasts group in Philadelphia, that lighter-than-air flight is a thing of the past. Robur argues with them that heavier-than-air flying craft is the way of the future - and he has proof! Robur boasts that the strange lights are his new aircraft and that it was he who placed the black flags the the famous monuments. The Weldon guys basically consider him a crackpot and laugh at him.

The arrogant Robur then decides, perhaps rashly, to kidnap the Weldon Institute's secretary, president, and the president's valet, and takes them aboard his new flying machine. Robur calls this machine the Albatross. He explains that it is a multi-rotor gyrodyne with many horizontally-set airscrews to provide lift and two vertically-set airscrews to drive the vessel forward and to provide control. Oh, and the whole apparatus is battery powered! Like a lot of early sci-fi writers, Jules Verne had a rather scarily accurate insight into future technology.

To cut a long story short, the Weldon guys didn't particularly like being kidnapped. Surprise, surprise! And they are ridiculously jealous of this new technology. It far surpasses anything they have designed. In order to exact some Victorian gentlemanly revenge and remove the competition, they decide to blow the ship up and make their escape. Believing this flying craft destroyed, the Weldon Institute wait a few months, then unveil their own new lighter-than-air craft, which is basically a hot air balloon with a small motor (a forerunner to the Zeppelin). They call it Go-Ahead. They launch it and start wowing the crowds with its capabilities.

Unbeknownst to the Weldon guys, Robur has secretly built a second Albatross using parts recovered from the wreck. He appears out of nowhere with his new ship and starts showing the crowds just how much better his craft is by literally running rings around the Go-Ahead. During the competition the two flying craft go higher and higher. Then disaster struck for the Go-Ahead. Its gas bags, unable to handle the altitude, rumble, quiver, and... EXPLODE!  Robur rescues the crew of Go-Ahead.

In one final display of arrogance, Robur then tells the crowds that the world is not ready for his technology yet. And he promptly flies his vessel off into the sunset.

Now let's look at Pierre Forget's artist impression of the battle in the sky between the two vastly different flying craft. It is stunning work, in my humble opinion. I love Forget's depiction of the moving airscrews. And the great use of red to represent the sense of height and the imminent mortal danger faced by those in the hot air balloon. 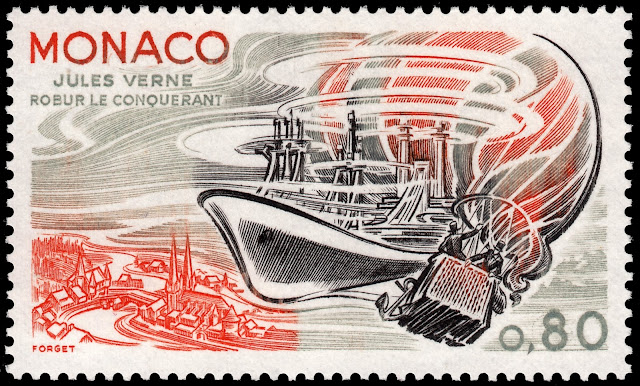